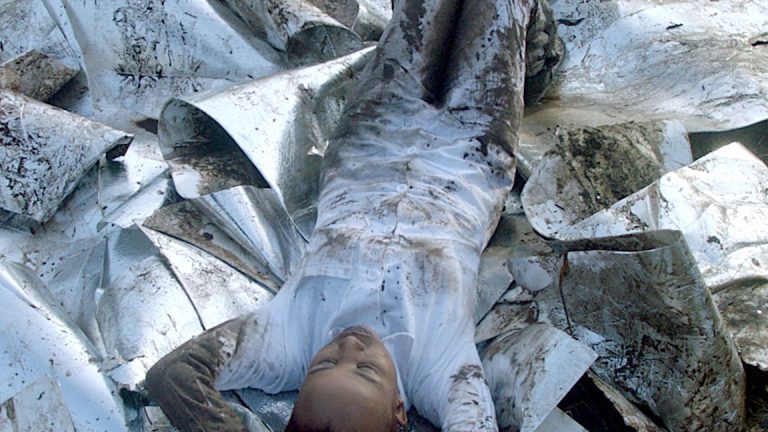 Donna Kukama will show a two-part presentation at the TURBA Gallery, which consists of a video installation and new works on canvas. She often revisits and questions the way in which histories are narrated, as well as how value systems are constructed, through an interdisciplinary practice that is informed by performance-based research processes that resist established “ways of doing” and often combine historical events with personal biographies.

Her current work constitutes a history book that is presented as a series of “chapters” taking the form of site- specific public encounters whose intention is not to relive the past, but rather to allow gaps for “comebacks” in the present day. For the Turba gallery, Kukama will present Chapter Q: Dem Short-Short Falls, a memorial work that revisits the site of the 1992 Biljmer Airplane Crash, known as the Bijlmerramp. The crash of the cargo plane that was traveling from the USA to Israel (occupied Palestine) affected a community of foreign nationals living in Amsterdam, mostly originating from Suriname, a former Dutch Colony. Taking its cue from the 1994 Nelson Mandela book title “The Long Walk to Freedom”, “Dem Short-Short-Falls” is the ‘Question-Chapter’ of the history book. The site of the performance holds two points of significance; The memorial for the victims of Bijlmerramp of 1992 and the Bijlmermeer park which was renamed, in 2014, as the Nelson Mandela park. The performance and resulting two-channel video installation serves as a commemoration of the unrecorded trauma and loss at the point of impact of the crash, while also physically tracing slippages and exposing the gaps in how the ideals of “freedom” and a “post-colonial society” continues to remain murky.

The works on canvas by Kukama often include ‘material’ such as spells, songs, stardust, sunshine, dreams, moonlight, in combination with text, to create an alchemy of narrative that renders the invisible as ‘present’ in her work. They unearth a tight relationship where memory (past) and imagination (future) are tangled up through (in)discernible gestures and poetry that create a portal to the multitudes of timelines through which the artist travels. The material, title, process, aesthcetic, and timing of the work are often intertwined, inseparable, and present another aspect of Kukama’s ongoing equiry with processes of writing history.

Donna Kukama has exhibited and presented performances at several notable institutions and museums, including the Nottingham Contemporary in Nottingham, Kunsthal KaDe in Amersfoort, Padiglione de’Arte Contemporanea Milano in Milan, South African National Gallery in Cape Town, Museum of Modern Art in Antwerp, Tate Modern in London, nGbK in Berlin, and the New Museum in New York. She has participated in the 57th Belgrade Biennale; 12th Lyon Biennale; the 6th Moscow Biennale of Contemporary Art; 32nd Bienal de São Paulo;  8th Berlin Biennale (as CHR); the 10th Berlin Biennale‘s public program, and the South African Pavilion at the 55th Venice Biennale. Kukama was the 2014 recipient of the Standard Bank Young Artist Award for Performance Art and was nominated for the MTN New Contemporaries Award (2010) and the Visible Award (as NON NON Collective) in 2011. She currently teaches at the Wits School of Arts in Johannesburg, SA and is currently a guest professor at HBK Braunschweig in Germany (2019-2020).