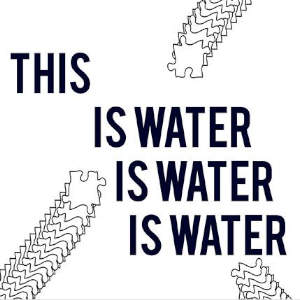 Pham’s art is an investigation about ancestry, identity and integration. Due to his education in Music, Architecture and Fine Arts, he has a strong focus on conception and uses several media aiming for a transdisciplinary discourse. The process of becoming self-aware and the potential of interaction between the individual and society are important aspects of his art practice. Thus, he examines questions about mutuality of activity and passivity within scenarios of imbalance and (re)achievement.

Pham’s work and performances has been exhibited in both solo and group shows in China, Palestine as well as Iceland, Germany and Finland. Lately, the artist has been awarded with several art scholarships from Künstlerhaus Schloss Plüschow, Künstlerhaus Lukas and KulturÖsterbotten.

The artwork ‘This is water is water is water’ is an expansive, performative installation dedicated to the themes of identity, conformism and (im-)permanence.
It consists of 304 mirrored puzzle pieces augmented in their size, which are first displayed in the form of piles across the space and can subsequently be assembled on the floor by the visitors. Inspired by Bertolt Brecht’s theory of epic theater, the work considers itself to be a stage space that liberates the visitors in their role as recipients by activating them as executive elements/protagonists. The installation utilises the principle of puzzling and, firstly, through the mirror materiality, becomes an acoustic-sensual experience in the moment of joining together. However, the ambivalence of the idea is also established in the contradiction between the slick, cold surface texture of the material and the haptic, naïve-childly experience which arises by grasping the oversized pieces of the puzzle.

With simple, familiar materials (mirrors, puzzles) and a very reduced artistic vocabulary (puzzles piles, puzzle surfaces), a spontaneous, constantly changing landscape emerges in which the visitors can move around and appropriate the idea of installation as static.
The creative process of assembling and simultaneously reducing, which is inspired by the theory of Freud’s Eros and Thanatos, is a confluence with observation and reflection in a reciprocal act of constant flow. The permanent dynamics and the concept of the liquefaction of things as coined by Zygmunt Bauman are underlined by overcoming the typically holistic image of the puzzle. Through the reflection of the puzzle pieces, the work eludes the convention of a fixed motif and, due to its modular structure, rejects the desire for completion. Instead, it sees itself as a constantly rejuvenating and fragmenting sculpture that scrutinizes the fragility of both identity and life.