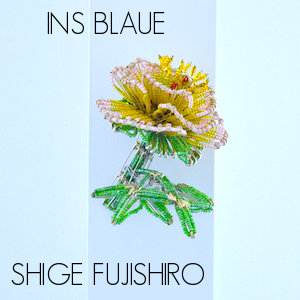 For ArchitekturZeit Hannover, which offers young artists, designers and architects the opportunity to show their work in the format “INS BLAUE”, the TURBA Gallery Hannover offered Shige Fujishiro the opportunity to juxtapose his works with those of Wataru Murakami in the exhibition “Still life Tracing”. While Wataru Murakami’s artistic works are based on the medium of photography, Shige Fujishiro works sculpturally by forming objects using beads and safety pins. Both are connected by the theme of their own space.

While one of them observingly deals with the events at his own workplace, the other expresses his ideas of his own free space in forms and objects.

On another level, both are united by the meticulousness of their working methods, the play with perspectives and an outstanding compositional ability. We were very pleased that we were able to bring these two positions together and about the lively response and numerous visitors.

Shige’s works have been exhibited in recent years in Hiroshima, Seoul, Wroclaw, Bornholm, San Lorenzo, Munich and Bremen, among others.